Aadal Arasan, the state chairman of the RSS in Tamil Nadu, condemned the DMK for spreading false information and spreading rumors about the RSS and Muthuramalinga Thevar.

On October 14, Murasoli, the official newspaper of the DMK, published an article quoting Pasumpon Muthuramalinga Thevar saying: “Shared on Whatsapp: Death can come at any time, but we must not let the RSS infiltrate Tamil Nadu even if we let’s die”.

Condemning the fake news published by Murasoli on Thevar and RSS, Tamil Nadu State President Adal Arasan issued a statement saying that Murasoli had published fake stories that Muthuramalinga Devar was opposed to the RSS organization.

In a statement by Adalarasan, “Murasoli, the official magazine of the DMK, which leads the ruling coalition in Tamil Nadu, published a false report erroneously quoting Pasumpon Muthuramalingath Devar as saying he opposed the entry of the RSS in Tamil Nadu. . Not only is the information wrong, but Pasumbon Muthuramalinga Thevar was close to the RSS organization during his lifetime and valued his friendship with the RSS leaders.

He continued: “The 51st birthday of Sri Guruji Golwalkar, the second leader of the RSS, was celebrated with great enthusiasm throughout the country in 1956. The ceremony was presided over by Pasumbon Muthuramalinga Devar in Madurai, Tamil Nadu . “His ideas were aligned with the views of the RSS,” he said during his address at the ceremony.

He added, “If the truth is as follows, it is shameful that the DMK and its spokesperson are trying to create a false and negative impression about RSS among the people of Tamil Nadu by stating that Pasumban Muthuramalinga Thevar, who is respected by patriots and devotees of God, opposed the RSS organization.

He concluded by noting that the dissemination of false information and defamation of the RSS by the official newspaper of a state’s ruling party is strongly condemned. 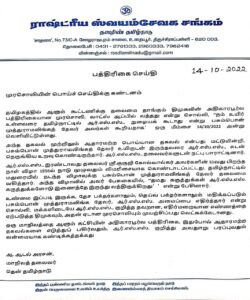 It should be noted that Dravidian dealers used to insult Devar and now suddenly display their affection for Thevar for the sake of votes. Dravida Viduthalai Kazhagam leader Kolathur Mani, who is known for his close ties to the banned terrorist organization LTTE and for being a periyarist, asked at a meeting if the people of Tamil Nadu needed a Tamil ( Muthuramalinga Thevar) who started violence against lower caste people or a Kannadan (EVR alias Periyar) who advised Kamarajar to imprison Thevar. He used the Tamil expletive ‘avan’ to describe Thevar, who is revered by many in Tamil Nadu. Subhavee, another motor mouth periyarist, previously held the same position as Kolathoor Mani about Thevar. It should be noted that Pasumpon Thevar was acquitted of all charges in the Ramanad riots of 1957. However, Dravidian dealers continue to spread false information about Muthuramalinga Thevar’s involvement in the Ramanad riots.

In another such incident, on the occasion of Thevar Jayanthi (October 30, 2020), the anniversary of the birth and death of one of Tamil Nadu’s greatest nationalist leaders, the leader of the DMK, the MK Stalin, insulted Thevar by rubbing his hands with the “vibudhi” prasadam without even applying it to his forehead in order to maintain his “rationalist” credentials.

The false stories of DMK and its ecosystem were exposed by netizens who cited the book “Thevar Oru Vaalkai (Life of Thevar)” by Baalu ​​Sathya, in which the friendship between RSS and Pasumon Muthuramalinga Thevar was clearly explained . SG Suryah condemned Murasoli for spreading false information about Thevar and RSS.