Devyn Bakewell has opened up about what inspired her to write the sequel to her debut novel, “Greater Love” with Omarosa Manigault Newman.

On Saturday, November 5, from 10 a.m. to 5 p.m., the 15th Annual Leimert Park Village Book Fair (LPVBF) took place virtually. Hosted by Jasmine Sanders, co-host of the nationally broadcast “DL Hughley Radio Show”, the event was free and open to everyone.

The family event is based in the heart of Leimert Park and according to LPVBF, “the mission is to promote, encourage and defend literacy, education and the love of reading throughout the Greater Los Angeles area. “.

Award-winning actress and author Jenifer Lewis is the 2022 Book Fair Ambassador. She is the author of two books, “The Mother of Black Hollywood” and “Walking In My Joy!” Jenifer starred in ABC’s “Black-ish” and appeared in more than 400 episodic TV shows, 68 movies, 40 animations and four Broadway shows.

This year’s lineup included the Pulitzer Prize-winning creator of “The 1619 Project” and a staff writer from The New York Times magazine, Nikole Hannah-Jones, who spoke about her work on race, social injustice and reparations.

In addition to Hannah-Jones, actress and social media personality Tabitha Brown talked about her first cookbook, “Cooking from the Spirit” and had an in-depth conversation with Wylissa Bennett. Brown’s previous work, “Feeding the Soul,” was a New York Times bestseller. 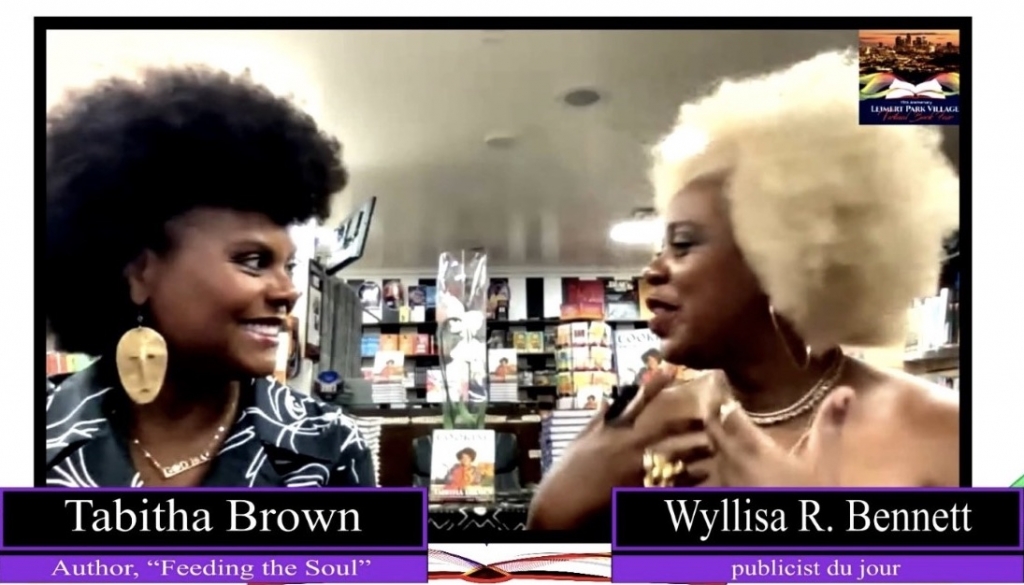 Tabitha Brown discussed her books “Feeding the Soul” and “Cooking From the Spirit” with Wylissa R. Bennett. (Screenshot)

Brown battled undiagnosed autoimmune chronic pain in 2016, which led her to believe she wouldn’t live to be 40 — that is — until she started to approaching her health differently, completely changing her diet and going vegan in 2017. Tabitha

Acclaimed best-selling author and historian, Vanessa Riley, spoke about her latest book, ‘Murder in Westminster’, which is the first book in ‘The Lady Worthing Mysteries’.

First author Kai Harris read an excerpt from her book, “What the Fireflies Knew.” Right after, she struck up a conversation with journalist and author Devyn Bakewell. Bakewell also shared an excerpt from her novel, “Greater Life.” She discussed the concept and inspiration behind her book with television personality and author Omarosa Manigault Newman.

Adiba Nelson read an excerpt from her book, “Ain’t That A Mother” with a conversation with radio personality Mischa Duffie right after.

Children’s Storytime Hour was hosted by LA Parent Magazine and featured a list of award-winning children’s authors who read excerpts from their novels. There were musical and dance performances and a special “tab time” featuring Tabitha Brown with “How Music Can Make Us Feel Different Ways”.

A plethora of other authors have made appearances reading their novels. The event also included giveaways which included a publisher book giveaway, tickets to the LA Philharmonic Holiday Dudamel Performs Nutcracker Concert, LA Philharmonic Holiday Concert Festival “Rock My Soul” with Carmen Jones Screening featuring a live performance by I Nail Bridges, a Taschen Book coffee table, and more. There was also a round table, a tribute to Sidney Poitier and much more.

Snoop Dogg is launching a collection of ...